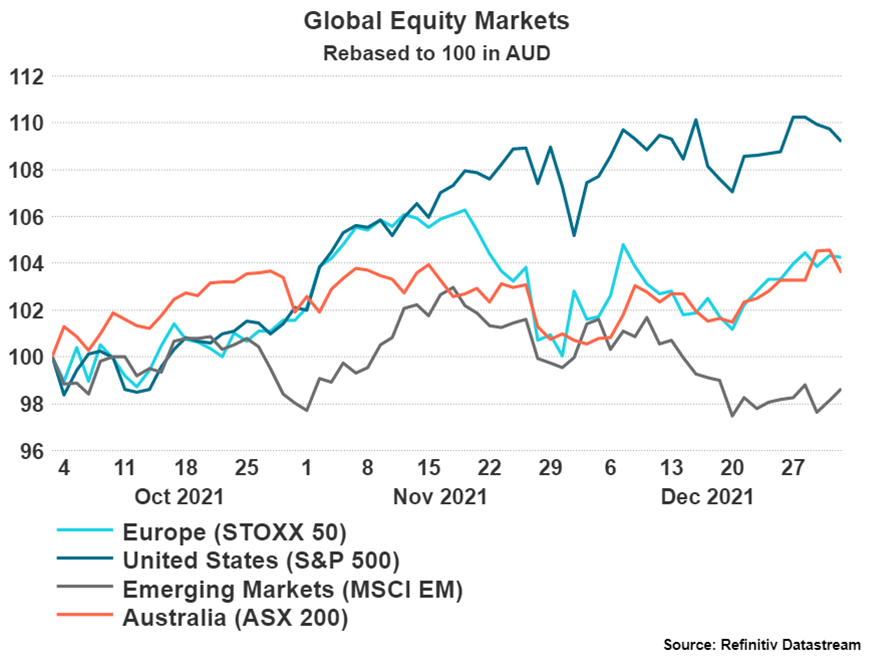 The gradual signs of a slowdown within equity markets last quarter appeared to follow through to the December quarter for all major markets except for the United States.

In saying that, Europe and Australia still ended positive on the quarter (4.3% and 3.6%, respectively). Compared to the United States’ 9.2% gain, there was clear divergence. This divergence occurred in November off the back of overly conservative earnings expectations getting beaten to end the year, especially in mega cap stocks such as Alphabet (Google), Apple and Microsoft.

Australia and Europe traded nearly in-line with each other and whilst ending up on the quarter, the two equity indexes traded sidewards from November based on the absence of such mega cap tech stock beating expectations. This portrays the significant difference in sector composition of the US compared to Australia and Europe (much higher technology weighting in US).

A comparison of the Russell 2000 (Smallest 2000 companies in the US), the NASDAQ (Technology) and Dow Jones (Industrial overweights) highlights the uneven distribution of returns helping the strong quarterly gain. 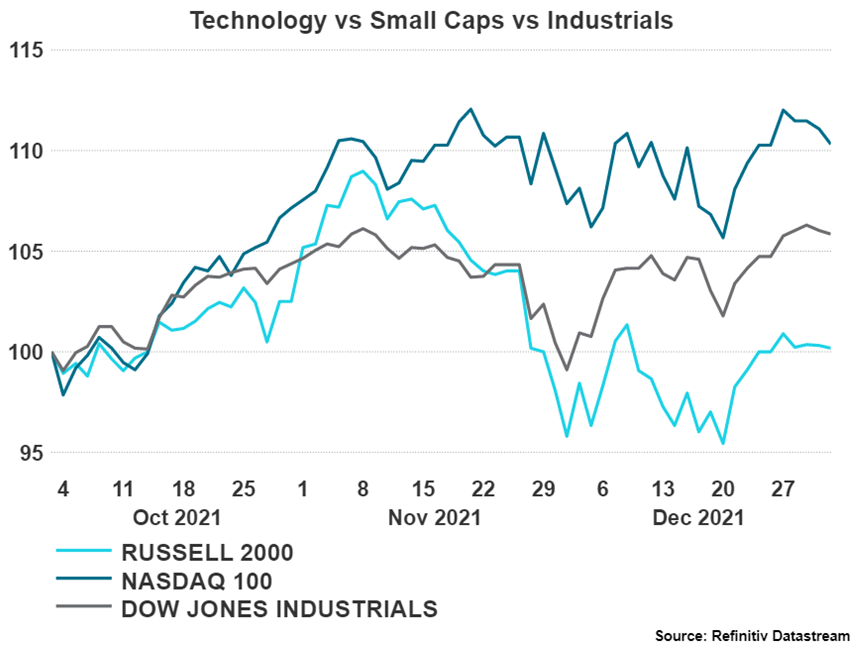 After sharp rises in these US indexes through October, November saw volatility return to the market as significant moves in short-term bond yields suggested possible slower than expected growth in the medium-term.

This impacts more economically-sensitive stocks such as small caps (Russell 2000), whilst the well-known non-economically sensitive technology stocks (NASDAQ) were not as impacted. The divergence between these two markets was a significant ~10% to end the quarter as noted by the above chart.

Even though the NASDAQ ended up 10% on the quarter, only 31% of the stocks in the NASDAQ were trading above their 200-day moving average. This means that the performance of the index is only coming from a select few stocks and shows possible weakness. 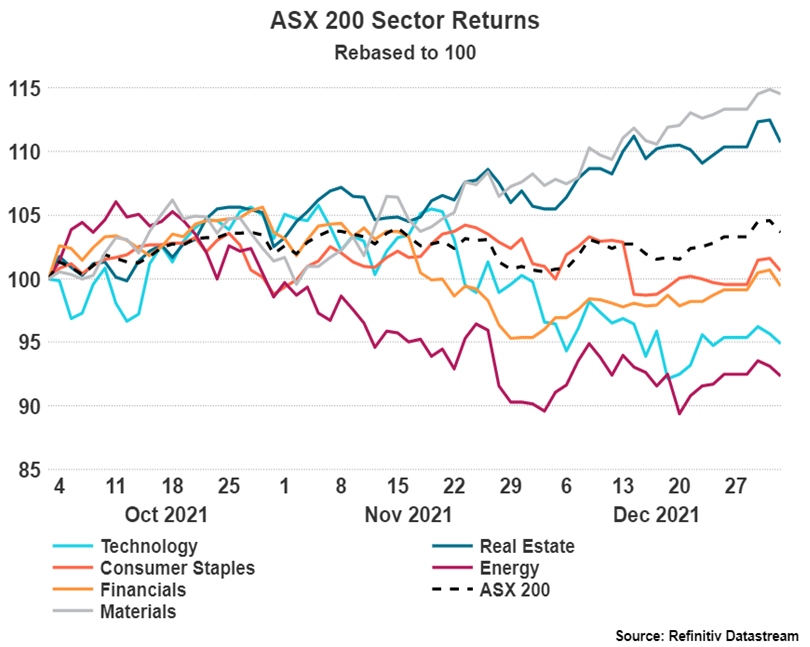 The sectoral movements within the Australian market that were noteworthy were the significant gains in both Materials (14.5%) and Real Estate (10.7%) companies. In stark contrast with last quarter, there was a rebound in the iron ore spot price. This supported a significant gain in the major material companies that drive that sector.

Within the real estate sector there was a post-Delta lockdown 6.3% jump in national housing commitments, the sharpest rise since the beginning of 2021 which subsequently drove property prices higher.

The sectors most negatively impacted across the Australian market were Energy (-5.2%) and Technology (-7.6%). Energy companies were affected by the sharp dive in the Crude Oil price in November as the perception of possible slower economic growth arose. Technology was impacted by the sharp rises in short-term government bond yields and the negative correlation this has with technology stocks that Research has addressed in prior reports. 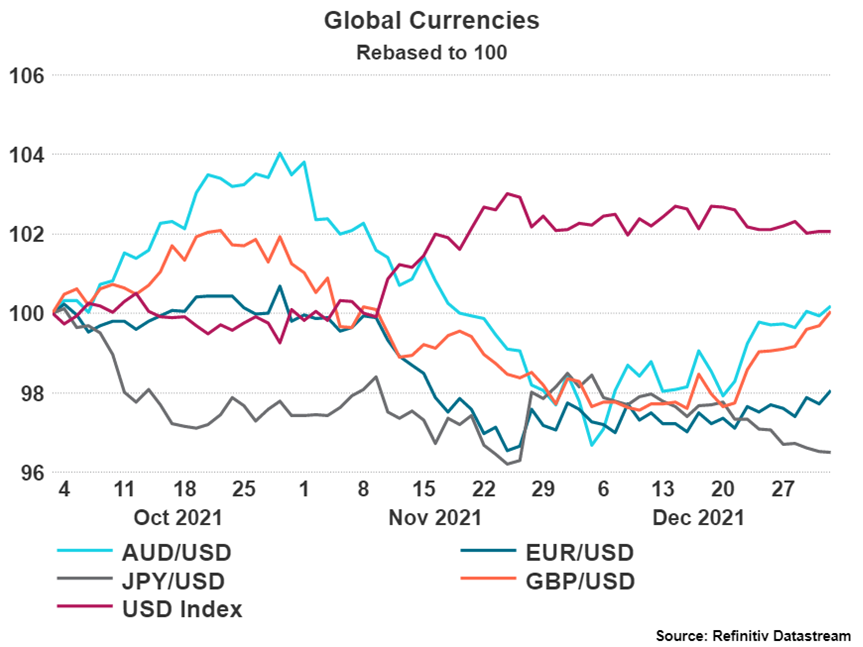 It was a volatile quarter in the currency markets as the United States Dollar (USD) was the only currency that made significant gains (2%) against other currencies.

The Australian Dollar (AUD) after rallying strongly to start the quarter ended nearly unchanged along with the British Pound (GBP).

The Euro lost about 2% against the USD over the quarter, whilst the Japanese Yen ended down 3.5%. 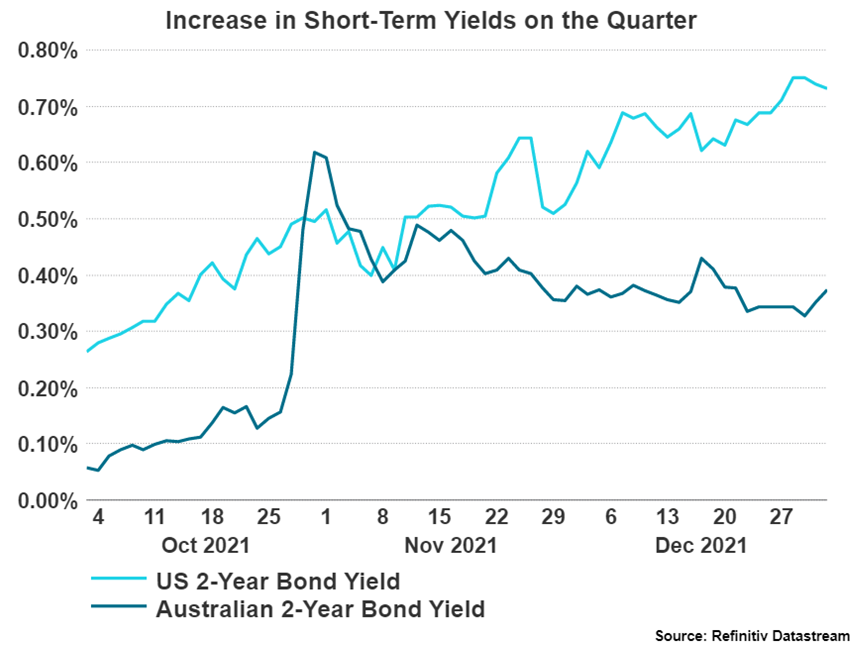 As per usual, the fixed income market remains the most important financial market in the world. Extremely sharp rises in the short-end bond yields are exhibited in the chart above.

The Australian two-year bond yield rose from 0.05% to 0.36% in one quarter as rate rises from the Reverse Bank of Australia (RBA) started to get priced into the market. The United States two-year bond rose of 0.26% to 0.74% within the same time frame for the same reasons.

Now compare this to the yields of the 10-year bonds. 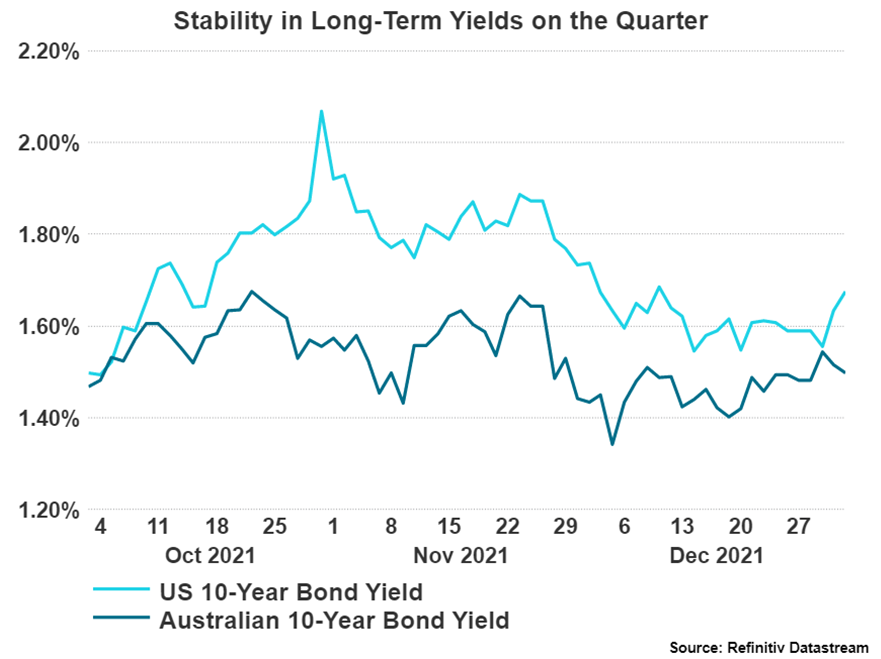 Minimal changes to the longer-term 10-year bond yields took place across the same quarter. What this means is a flattening of the overall yield-curve is taking place.

With short-term rates rising and long-term rates staying nearly unchanged, the take-away is that the market does not believe continued strong economic growth (and subsequently rate rises) are sustainable looking out 10-years. It can also be interpreted that the bond market doesn’t believe high inflation numbers will last into the future. 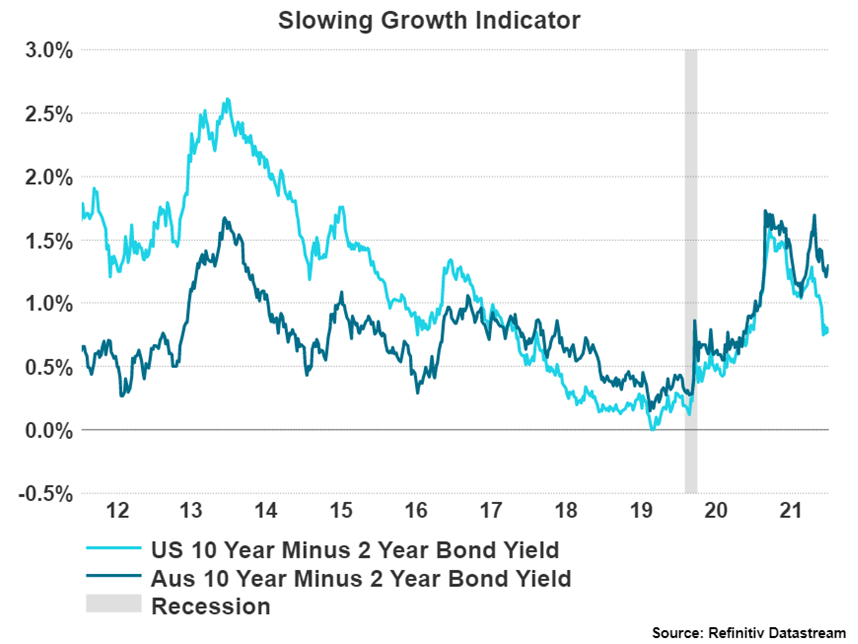 The result of all this information is the above chart. A collapse in the 10-year minus 2-year spread, a reliable indicator of future economic growth. When this spread has hit 0% or gone negative in the past, it predicts a recession (most of the time).

The spread has not gone down this far yet, but it has shown the possible trend that seems to be beginning, indicating a slowing in economic activity over the next few years.

The outlook of equity markets is one of general optimism combined with wariness as the US begins to raise interest rates.

Research expects the reopening trade to continue into 2022. This should help to support equity markets. Although the Omicron variant has caused some disruptions thus far, these disruptions are far less severe than what was seen earlier in the pandemic.

Even with much higher coronavirus case counts appearing in most countries, the hospitalisation and death numbers are not increasing dramatically and are far lower than the earlier strains of COVID-19. Research believes this will slowly turn the virus into an endemic sickness, meaning it will gradually be perceived as a ‘cold’-like sickness.

This change in mindset and government reaction will take time but it appears to be trending in this direction. This will also be a positive wind behind equity markets as a true return to normality will be priced in. This must be taken with a grain of salt of course, as what we have all learnt from this pandemic is you never truly know what is going to happen next.

Whilst there are positive signs of a good year for equity markets, rising interest rates have not been kind to equities in the past. Late 2018 showed the result of raising rates beyond the markets comfortable level. This poses a risk to equities if rates continue to climb to fight the worries of inflation.

Equity allocations should remain diversified across both Value and Growth exposures due to the heightened level of uncertainty that enters the market when central banks begin to raise rates. Value stocks should continue to do well as economies continue reopening. Value stocks within the commodity sector have been performing well as they adjust to the levels of inflation in the market, if inflation remains high, it is natural to expect they continue to do well. In the event of slowing economic activity, a fall in longer-term yields could reoccur, helping the highly valued Growth stocks.

Within the fixed income market, four rate hikes are expected to take place over the course of 2022 within the United States. These will be the first-rate increases seen since 2018. An important factor to understand with rate hikes is that the flow on effects of the rises generally have a 12-month lag effect on markets. Inflation hit 7% in the US, a 40-year high, in January 2022.

The rate rises are now an attempt to cool down inflation as well as get interest rates back to ‘normal’ levels. This will coincide with already underway tapering efforts by the Federal Reserve. Research believes these measures taken by the Federal Reserve will eventually slow down the economy. This is most likely to start to occur in the second half of 2022 and beyond.

Fixed income allocations should also remain diversified across both long and short duration bonds. As rate hikes begin this year, a slight overweight to shorter duration bonds will remain part of the philosophy. However, as rates do increase, Research will be watching for a point in time where longer duration exposures should be slightly overweighted once again.

If the 10-year yield minus 2-year yield slope action is correct, then slowing growth is coming in the next couple of years and a fall in rates back toward the 0% bound is not unlikely in the medium term. This is an assumption that the low interest rate, low growth, and low inflationary environment could once again return.

General Advice Warning
This update is issued by Ventura Investment Management Limited (AFSL 253045), which is a related body corporate of Centrepoint Alliance Limited.

The information provided is general advice only and does not take into account your financial circumstances, needs or objectives. Where you are considering the acquisition, or possible acquisition, of a particular financial product, you should obtain a Product Disclosure Statement for the relevant product before you make any decision to invest. Past performance does not necessarily indicate a financial product’s future performance. It is imperative that you seek advice from a registered professional financial adviser before making any investment decisions.